Very early on Tuesday mornings it is my habit to lie in bed just as it get light (sun rise, birds cheeping and all that) and consider what I might write about here.  It is a rare occasion when I plan much ahead, ideas usually come to me in that land between sleeping and waking on the day I write them up.  I always have some project or other on the go - new yarns to chat about or a discovery of a new technique.  But this morning nothing...  It's not that I haven't got something 'on the needles' or plans for a big project and I even have something that I have finished and is waiting to be sewn up,  Its just that I'm not yet ready to go public on these and I don't love the FO enough to rush to sew it up (does anyone else make things from time to time that they don't like?). 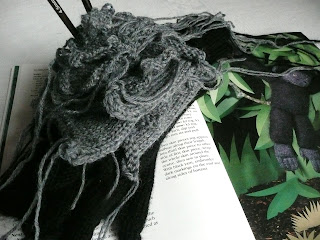 No it's simply that I am blocked.

Then listening as I do to Radio 4's Today Program with half an ear,I heard a debate on whether writers block really existed.  One person saying that writers were just being precious and self indulgent, if they had children and only limited hours in which to write they would just get on with it, like any other job.  The opposite view was put by a man who quoted Joseph Conrad who seemed to be in extremis with writers block 'and he was a father of children'.  To which the woman retorted 'I bet he never had to pick them up from playgroup'  - Touché

After listening to this and identifying more with the busy mother (even though the children are grown and two of the four have flown) and not a real writer but a blogger to boot I cannot allow myself to indulge in the fantasy of writers block.

So it boils down to the fact that I don't know what to write about, so instead of sitting down at my PC straight after breakfast I DID THE IRONING!!! 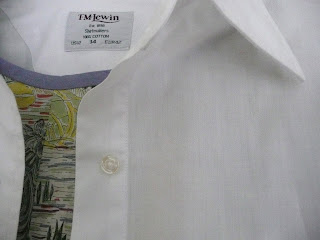 Then I made soup and now I seem to have begun generally nattering!  Displacement activity?  I'm afraid so 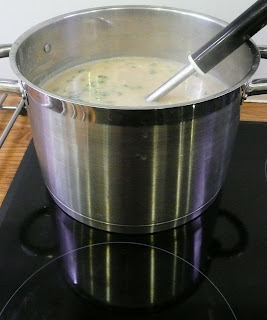 The soup is very good - here is the recipe


So what am I knitting at the moment?  It's color affection in the Countess Ablaze Donegal that I mentioned earlier.  Everyone says it looks nothing like the finished object until its blocked and I certainly hope so 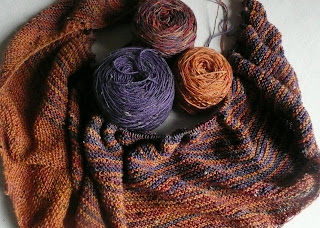 The yarn is soft and delightful, I know the purply/blue will be more dominant once the shawl is finished with a two inch border in it but at the moment I have to admit it just looks like a load of baggy garter stitch!

Your Color Affection looks great. Mine is looking very limp and a bit of a muddle as well and I seem to be ending up with more rows and stitches than the patterns says as I haven't got to the end of all the existing stitches on the short rows! I too am hoping it will all come together with the plain border and the blocking!