Now I know I made a promise on twitter that I would chat a little on buttons this week but I haven't got there quite yet.  My eternal problem is I get diverted and last week a bunch of us at knitting group  agreed to try steeking, we would knit something suitable, bring it (and our scissors) to Monday knitting group and plunge in with the scissors all together.

Here we are, on Monday night

The idea began with Cathie finding a suitable pattern (on Ravelry of course) Steek this coffee cozy  Now, if I had paid proper notice of the instructions, instead of rushing off on a frolic of my own, I might have avoided problems later on.  But I got so involved in the looks of the thing I forgot to check up on the technicalities.   I decided to make a cosy for my cafetierre rather than a mug-hug and last week just happened across this lovely mitten pattern by Mary Scott Huff - perfect!   All went well at first, I charted the design 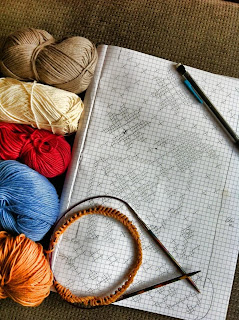 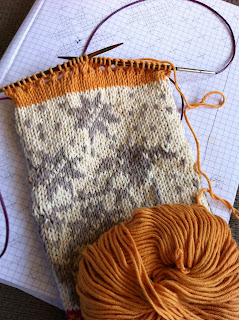 Found a vase suitable for blocking 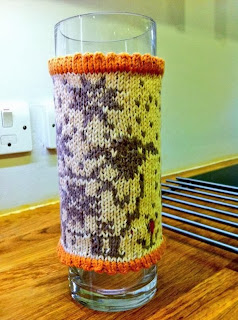 And then it came to the stage of reinforcing the steek (that's where you cut).  The trick is to crochet two rows of reinforcement catching in two stitch halves where there should be knitted parallel vertical lines, one of each colour.  Just like Claire has here (the original pattern has detailed instructions) 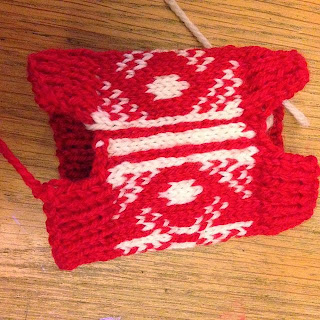 That way you will have secured one stitch of each colour firmly to the other.   I realised I had failed to do this but, fingers crossed, all seemed well as I cut.  Then, disaster, as I put extra strain on the stitches, picking up the stitches to knit the overlapping opening, one or two of the grey stitches pulled out


But with a little bit of sleight of hand and some firm back stitching along the line of stitch pick ups it is holding steady now.