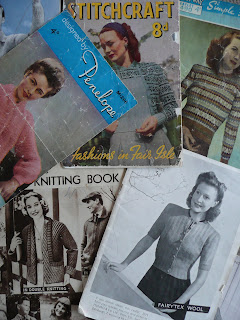 I bought my first batch of vintage knitting patterns out of sheer curiosity.  I have written before about how my mother and mother-in-law had been great knitters throughout their lives.  They were both young women in the second world war, when to be well dressed women had to be resourceful and crafty.  So I assume if they wanted a new jumper or cardigan they set to and got knitting.  Yet despite both women having carefully conserved and very well stocked work baskets, that I inherited; no patterns survived from their war years.
Then I spotted that someone was selling a large bundle of mixed patterns on EBay.  It was a great 'win'.  The bundle contained patterns for men, women and children.   It was no good just looking, I needed to see what it would be like to knit one of the patterns up.
While not wanting to depart too far from the spirit of 'make do and mend' I also wanted the finished article to be a thing of loveliness.  In my stash I had some Debbie Bliss pure silk. 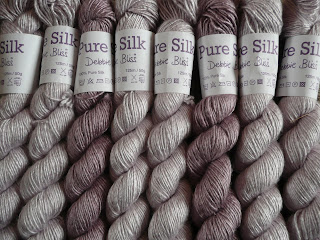 I chose a little button up to the neck number with a small collar.  For the cardigan to be wearable, I am not at all sure about the pockets with buttoned flaps high up on the front.  I intend to knit mock flaps attached in such a way that I can remove them if they don't look right.  I am also making it a little longer.  I understand that CC41 regulations restricted the length of all sorts of clothing (including banning turn ups on men's trousers) to save fabric and yarn but I am not going to be too purist 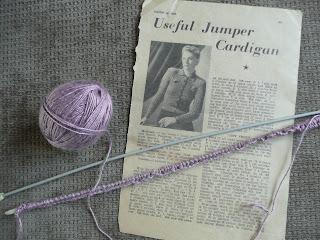 With not enough in either colour to make a whole garment I decided to have both.  Using both colours with the darker shade for the ribbing and lighter for the rest also seemed a gesture towards doing the best with what you have got. 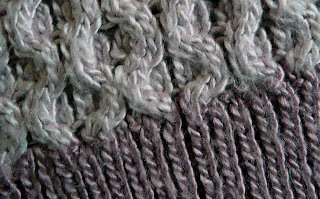 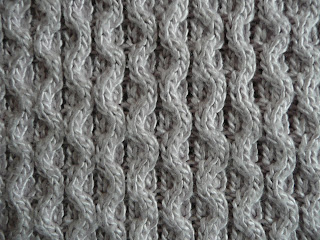 The honey comb pattern is achieved by reversing the direction of a simple four stitch cable so that the twists face each other, then face away, alternately. The soft, silky and drapey yarn is a joy to knit with, as you might expect.
But gosh the pattern is in a tiny size 32-34 inch bust. They say that that the rations in WW2 ensured a very healthy diet and that this, together with almost every able bodied adult working their socks off for the war effort, ensured a slim svelte population...sigh!  I needed to add some more stitches to make up a bigger size 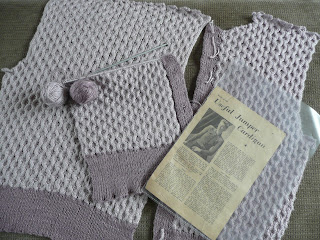 ﻿I have recently discovered that I knit rather in the same way I read books.  Just as I have one book for my handbag (train journeys) one in the sitting room and one beside my bed so I have three or four knitting projects on the go (one for knitting group, one for  television watching...)  This one's not quite finished, when it is I will post more pictures.

It's going to be beautiful, I love knitting but only in my dreams could I manage something like this, I can't wait to see it finished.
Emma x

I have quite a few vintage knitting patterns left to me by my grandma, it will be interesting to see how the pattern you are knitting turns out with modern yarn........I have never actually used any of the patterns I've inherited as yet.

That is going to be lovely, Catherine. I've got a small amount Debbie Bliss Silk but I haven't been able to decide what to use it for, or how it might knit up - I know, I should try a tension square!

Looks absolutely lovely! Have you seen the book A Stitch In Time? http://www.knitonthenet.com/stitchintime/

How lucky you are, not only to have scored that eBay find but also to have such crafty women in your family.

That cardigan looks great so far, can't wait to see it finished.

i feel terrible now. between you and me and the gatepost i have thrown away a great pile of old knitting patterns which i inherited from my grandmother (i can hear your screams from here). if i'd known about you i could have sent them to you and you could thrown them away (or kept ones you liked the look of). they weren't anything very exciting. generally just round necked children's sweaters. but i feel terrible now. i threw them in a moment of desperation to get some order into my house. the things one lives to regret!

I have a couple of vintage patterns, but have never tried using them. Yours is looking lovely, can't wait to see it finished and how if fits (they were small back then)

Eeeeeeeeeeeeek! I love vintage knitting patterns!!!! Yours is coming out so beautifully!
I have two strands of the Debbie Bliss silk! (all I could afford LOL) So incredibly soft! What a brilliant choice for this!
So glad I put up the link to the stocking pattern :) Yup, the back seam,... although in a stocking it might look sexy to have it ;)
Let me know if you try it and I definitely need to see pictures!

Gosh, I wish I had DB Pure Silk in my stash ;)
Your Cardigan is looking lovely, can't wait to see it finished. I often have 2 or 3 or 4 wips on my needles, although I'm trying to just work on one at a time this year!

It's so exciting reading everyone's comments, thank you. And please don't anyone feel bad about oppurtunities missed!

I promise to post a picture of my cardigan when it's finished (and the stockings if I make them, Tracy). Sarah, I had not seen that book so thank you for the link.