Something lost? Giving something away, and then wondering what happened to it?  I looked at the title and instructions for today's mass blog post before I went to bed last night.  No idea what to write, better to sleep on it than surprise myself this evening after a hard day at the PC (you didn't ask but I will tell - I was dealing with a full inbox)
Then I remembered the duck.  I knitted him when I was about 12, for my Godmother's son Paul.  It was the beak and feet that made the toy duck like, knitted in orange coarse cotton.  The head and body were two round shapes so duck looked roughly like a yellow snowman until he acquired his appendages. 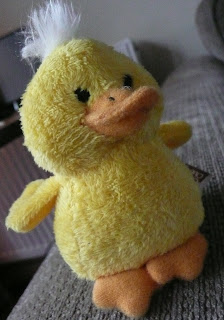 This is not him of course, although roughly the same shape I don't think I knitted any wings.  Duck became Paul's 'security blanket' and went everywhere with him.  The fine yellow wool of the body became thin and frayed until there was nothing left but the beak with shreds of wool hanging from it like fronds of a jelly fish.   Now instead of being hugged duck (who but a small child would still regard the scrap as a duck?) was grasped tightly in a chubby fist and the fronds constantly wafted about the face. 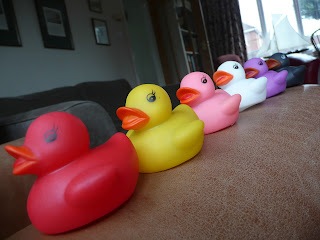 I doubt whether I would know where duck was now even if something so much sadder than a toy duck falling to bits had not happened .  One day when he was a few weeks short of his 21st birthday Paul was involved in a road accident and was killed.  25 years later I have grown sons of my own and sometimes wonder how I would ever get over something like that. 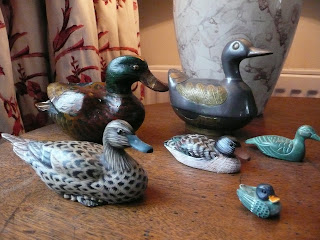 Today's topic has been so much fun because it's allowed us to look back on some of those projects we haven't thought about in a long time!

This reminds me of some knitted mice I did aged 12 or so! At the moment I am saving the craft blogs I read to ser me through my middle-of-the-night feeding sessions. Thanks for the interesting posts :-) C