I am hoping that Christmas is sufficiently far behind us to have left just a rosy glow.  I don't want the mention of leftovers to cause a shudder to run down your spine and conjure up visions of yet another recipe for using up cold meat and mince pies.

Because I am not talking about foodie leftovers but woolly ones, like these:- 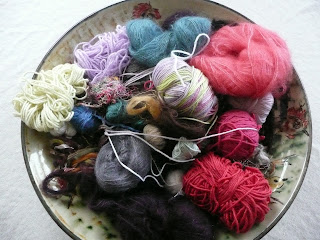 This is not stash (although these fiddly, tiny little scraps and half used balls of yarn do live in a ziploc bag in my stash box).  These are just bits and pieces that I can't bear to throw away despite having no idea what use I can make of them, I can't keep making knitting patchwork and honestly I don't really like making things in different yarn weights (OK I know I can double the yarn or more, I just don't want to).  I was reading about one woman's main reason for knitting toe up socks the other day.  She said it was because she could keep knitting to the last inch of yarn.  She has a point, what to do with three tiny balls of self striping yarn like this? 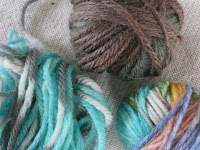 Actually I have seen one absolutely beautiful project made with left over sock yarn - here . I tried to copy the photograph to the blog but the website would not allow such a thing so please do click on the link and look at the fabulous afghan and marvel that it is a work in progress from a man who knits his own socks. 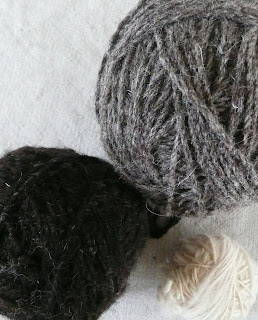 It may not look much but it is the last of my mother's hand spun.  My mother died on 19 January 2010 after a long and busy life and a mercifully short illness.  One of her hobbies was spinning and this yarn is spun from the fleece of one of my cousin's Jacob sheep.  It's quite hairy.  I would have enough to knit a pair of mittens or a beanie hat, but I am not sure I would wear them, I have scratchy issues (I like my hats and gloves to be supersoft and cuddly) and I would really want to wear whatever I make .  So if you can think of something, please let me know.

Meanwhile, straying a little on to the subject of stashes, did I ever tell you I am not to be trusted in a yarn shop? particularly at sale time?  I was in John Lewis this week, on Tuesday to be exact, which is why I'm a bit late with this week's post.  I spent the day shopping with no1 daughter for baby things and we were looking for a new mattress for the baby crib when I slipped away to the yarn department and found 900g of Debbie Bliss chunky Donegal HALF PRICE and ALL THE SAME DYE-LOT.  Totally ignoring No1 daughter's question 'what will you make with it?' after all she ignores me when I ask if she really needs another handbag, I just had to have it.

And now I have it home, smuggled past JTH,  I know exactly what I shall make.  A chunky throw for our bed. 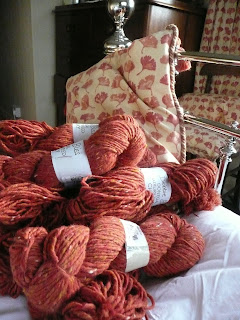 There just remains the question when shall I make it?  With several projects on the go already and at least three queued up with yarn and needles selected it may be a while. So it goes in the box under the bed, that's why it's called stash 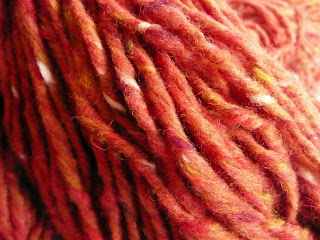 Hi Catherine,
I met you a knit and knatter a few weeks before Christmas and just had to let you know that I have serious wool envy the Debbie Bliss is gorgeous no wonder you couldn't leave the store without it, well spotted. Maybe if your Mum's wool is too scratchy to wear you could make a little bag or maybe a small cushion front.
Love Cathie (Caffee)x

Wrist warmers? Leg warmers? A snood (lined, if scratchiness was an issue)? Or if it didn't need to wear it, perhaps a teddy bear to pass down the generations... X

I don't know much about it but it looks to me like your mother was a skilled spinner! Jacob wool is lovely, in my experience, and gets much softer and fluffier with washing. But Cathie's suggestion of a little bag seems good - or maybe a cushion front? And thanks for sharing the sock yarn afghan - beautiful!