I have had a telephonic disaster. A couple of weeks ago I dropped my phone in water (don't ask). Now, the replacement of a mobile is pretty simple and, as far as the physical thing, not a big deal. The drowned phone was an old and very well used I-phone 4 with a cracked screen, not a huge loss in itself. I just walked to my local phone shop and the deal was done in ten minutes (plus a significant payment to the phone company).  No it was the loss of certain information and a whole set of photographs that has cast me into confusion

I was going to blog about Gwlana, I had so many pretty photos of the Welsh Countryside in the sun (yes SUN) and of the yarn, the people and the swatches.  Luckily Felix of Knitsonik podcasted about this wonderful workshop I attended in May far better than I would have

I also visited the Chelsea Flower Show for the first time ever and took many photographs of inspirational gardens to help with our own garden plans.

All gone except those I posted on instagram.  All this threw me off balance and out of my usual blogging routine.  However, there is a new discovery that I have wanted to share with you for a while ... Buttons knitted in as you go! 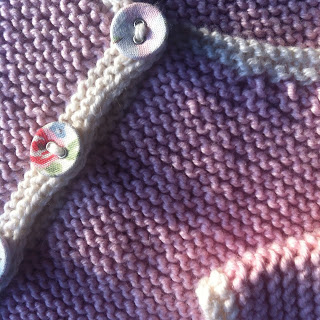 I don't think I have seen anyone describe this technique before but as there is really 'nothing new under the sun' I shall borrow the word Unvented from Elizabeth Zimmerman rather than claim to have invented a new knitting trick.

If you read my blog regularly you will know I go to quite some lengths to avoid having to do any sewing up - whenever possible I chose patterns that are knit in one piece or adapt others.  So I am pleased to tell you how I have worked out how to knit buttons into a cardigan as you go, no more sewing on afterwards.  It came to me as I was thinking about a safe way to attach buttons on the cardigans I made for Isabella.

Begin the button band, I have knitted it 'horizontally' - i.e. I picked up the stitches up one side, around the neck and down the other, working a couple of increases around the angle where the button band and neck band meet. But you can also work this technique if you knit a strip up and around from the bottom (a 'vertical' band). 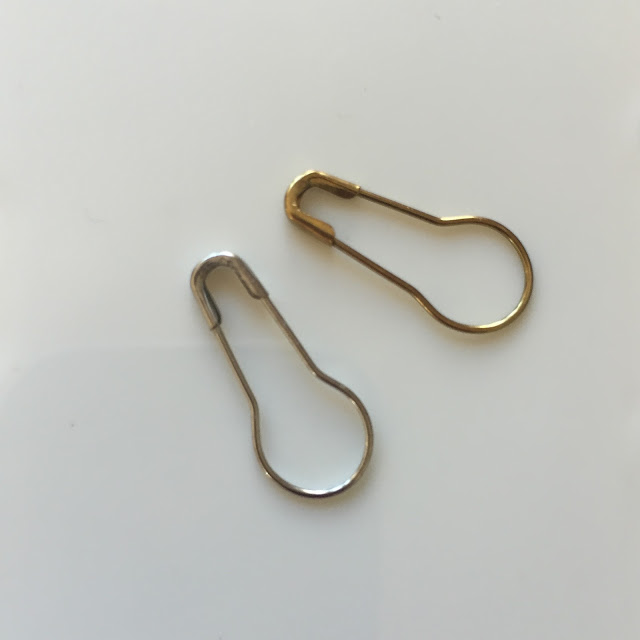 On a right side row, knit to your first button marker (it will of course depend on whether you are knitting for a boy or girl which side of the front bands this is!).  This technique will work with any two hole button, either where the holes are in the centre or on a shank. 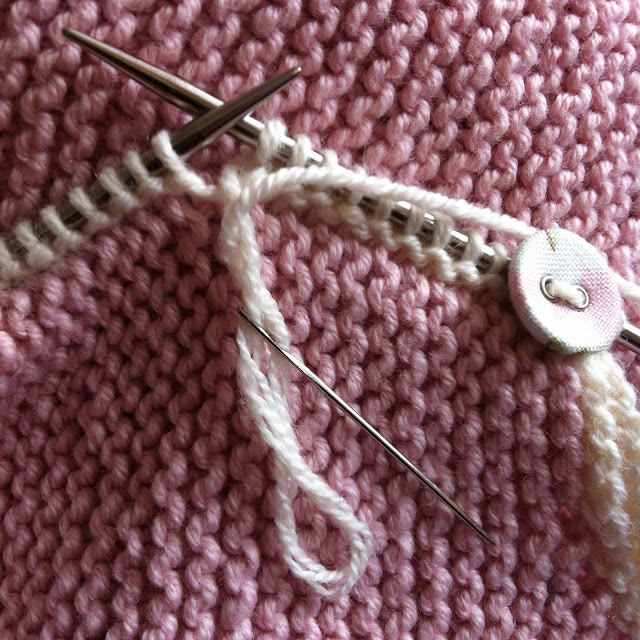 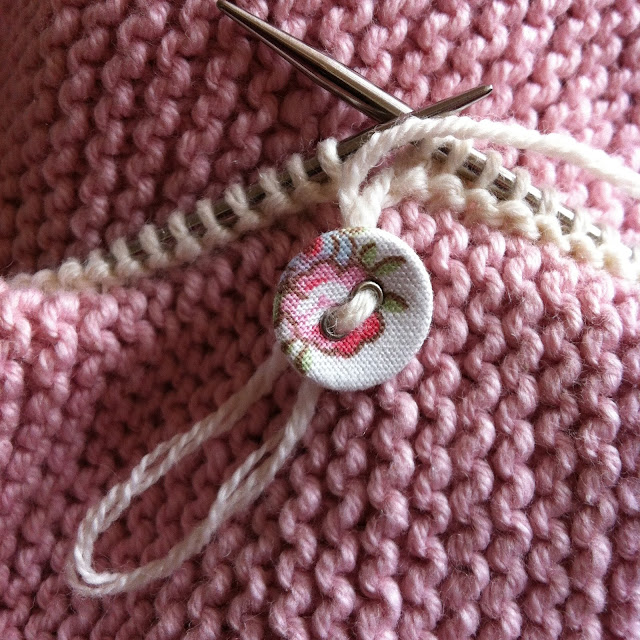 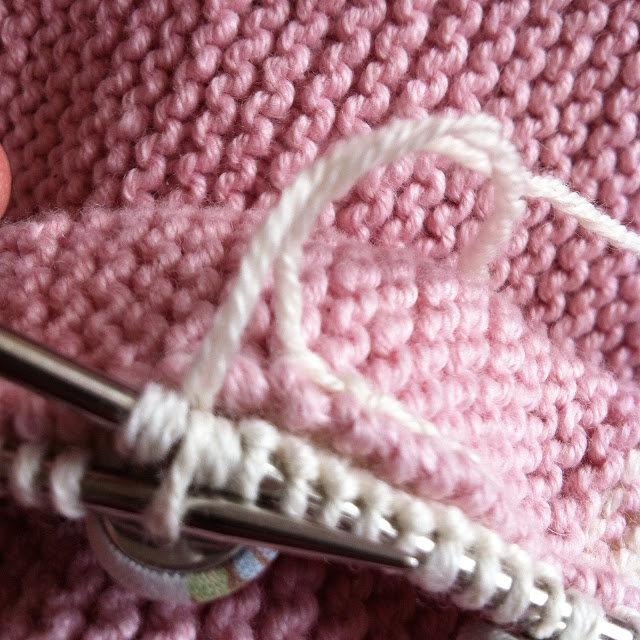 And you are done!  On the next row just knit back, it will be a little tight but you are saved the bother of stitching on each button with no loose ends (not even the two I describe in this button sewing tutorial). It is also very unlikely the buttons will come off, specially important in baby knitting as loose buttons are a choking hazard. 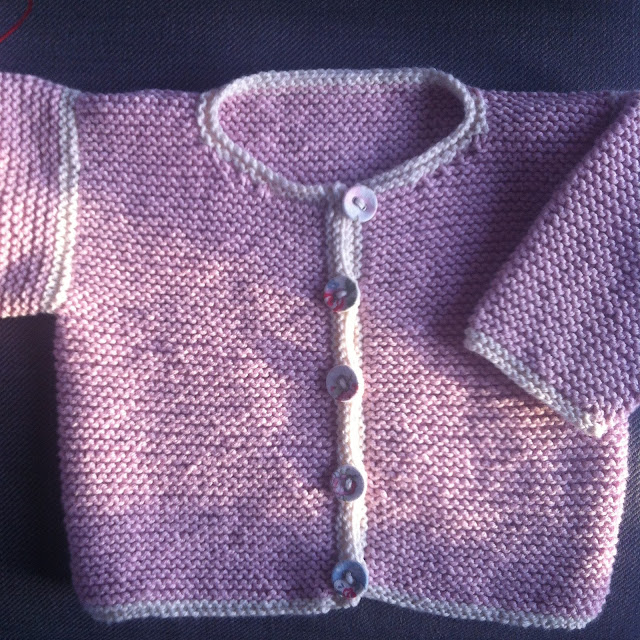 How simple is that?  Do please have a go and let me know in the comments what you think

The next times when your phone swimming in the water , you immerse in the rice and after is okay !
I love your button and the baby dress ....

I'm really sorry to hear about phone, Catherine. That's very frustrating. I hope there's a way to recover photos. This is a really interesting tip for the buttons. I'll have to remember this someday when I finally get to a point where I can knit well enough. :)

This is brilliant! I like how it makes the buttons baby-proof, and the fact it saves sewing them on at the end. I have two little baby sweaters I've knit for my granddaughter who is due in early August, and they are both sitting there waiting for me to sew on the buttons. :-)

Brilliant idea. NExt time I am organized enough to have buttons ahead of time, I'm going to try it. Cute sweater.

Brilliant idea - but I am not generally organized enough to have buttons ahead of time. Next time that I am, I'm going to try this out. Looks genius!

Do you think knitting buttons in as beads would also work, or would it be too flimsy? (I'm thinking of the dental floss or crochet hook method, not the stringing-all-the-beads-at-the-beginning-of-the-project method)...hmm.

Are the buttons shown above from Cath Kidston, they look like the ones I bought from her Bournemouth shop and used for the Joseph Cardigan, made for a friend's grand daughter.

One thing I learnt today from Daughter in Law, use buttons that are easy to do up, I put teddy bear shaped buttons on the Pueriperium cardigan made for first grandchild. Apparently the parents have never done the buttons up, too fiddly. Next time I make something for Edward it will will have ordinary round buttons rather than 'fun' ones.

Jess - this method of attaching buttons is adapted from the 'crochet hook method' of beading. The adaptation is to accommodate the way buttons have two holes on top rather than a hollow centre like a bead. I think you might be able to use the beading method as is with very small buttons but they might lie a bit squiffy.

Pixie-mum, Yes they are Kath Kidston buttons, bought from John Lewis. I agree re button shapes, I love the variously shaped one but the sticky out bits do tend to catch on the button holes