For the past week my household has been in the grip of an enduring love story.  The excitement has lead one or other of us to rush out into the garden with a camera at each coo or whir of feathers.
The collared doves have returned for a second year, checking out the site of their last year’s nest to see if it is suitable for this year’s accommodation 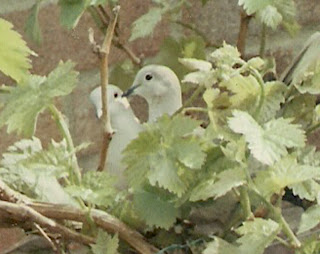 My study window looks over the back garden and one rainy day in February 2010, I caught my first sight of the pair.  Not particularly bothered by the storm. 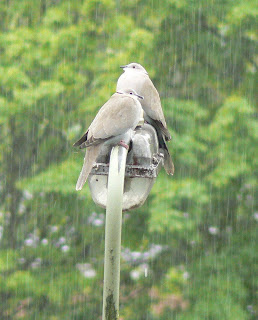 The nest they built in our grape vine was a rather rudimentary affair, just a rough platform of a few sticks really.  The young couple took shifts to sit, quite un-fazed by our comings and goings and all the attention from the family paparazzi 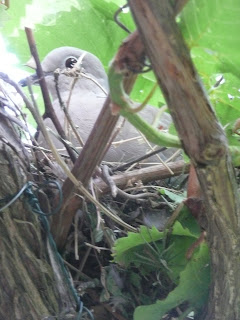 At my first sight of the baby I was amazed, it nearly filled the nest from its first day of life. 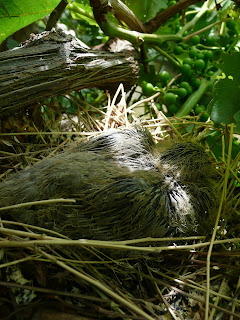 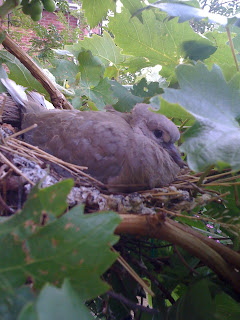 Resting after the first flight 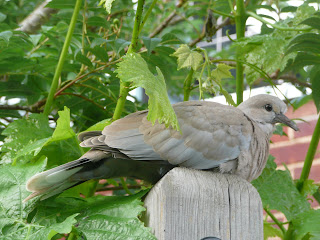 It took about three days for the baby to fly confidently around the garden as he first made his way from nest to rowan tree, tree to fence and then took off into the air.  Once competent he flew around the garden with his parents.  We gradually saw less of the trio till by autumn we saw no more of them.
Then a couple of weeks ago the garden was filled with their cu-coo-coos again.  On Easter Sunday morning they were perched together on the top of our open bedroom casement window.  Another favourite position is on the top of a drain pipe under the eaves of the house, Perhaps a position chosen for its sound enhancing properties. 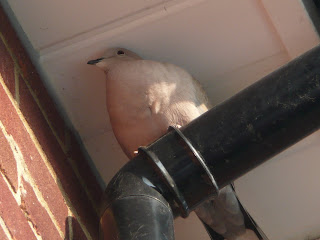 No actual nest has been built yet but we have seen one dove staggering across the lawn carrying a long stick like a feathered tightrope walker and this morning flying up to the old nest site carrying a discarded plastic garden tie.
I have not been quick enough to capture this activity but this is one of the doves sat on our garage roof this morning, his feathers ruffled by the morning breeze 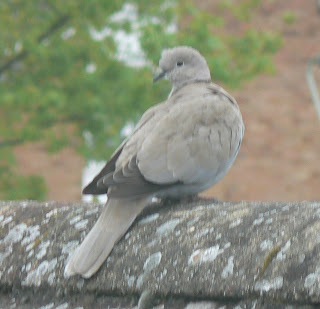 They will be such a pleasure to watch. I hope they stay safe.