Last year DS1 suggested he and I spent the day together in London.  At 25 and living in the capital for the first time he was exploring everything he could and wanted an introduction to visiting art galleries but also to show me the Natural History Museum through his adult eyes after all the visits we all as a family had made during his childhood.  We spent the morning at the NHM looking at the oldest and the newest galleries.  At the bottom of the main staircase behind the great dinosaur DS1 told me a little about the museum’s founders whose statues stand on the first half landing.  In the mineral gallery, I gazed at the beautifully tiled walls and hand crafted cabinets as well as the trays and trays of minerals, dull, shiny and sparkly in turn.    We took the lift to the top of the giant chrysalis that houses the new earth galleries then wound our way down looking at Darwin’s journals from his voyage on the Beagle, maps of climate change and much besides.

Lunch was in the roof garden restaurant of Waterstone’s in Piccadilly, marking a shared love of books and from where we spotted the remarkable Art Deco building that is DS1’s company headquarters.  In the afternoon at the National Gallery we followed JTH’s recommendation to look at just ten paintings beginning with the Wilton Triptych.
Triptych is not a new word to me it’s just that I didn’t consider it and I had not considered its meaning in art until I saw this painting, beautiful, vibrant, one of the earliest paintings on show in the UK. And what you may ask is its place in a knitting blog? 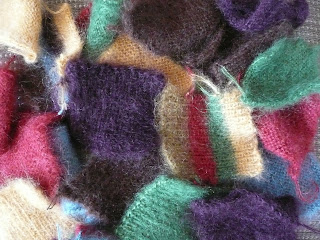 I thought for a while before giving this post the title triptych.  Although I know the word means ‘three of’ what always comes first to my mind is the Wilton Triptych and other beautiful early renaissance altar pieces.  But as this is the first of three posts about a trio of jewels with linking base colours of grey and bright jewel coloured decoration the title felt right.
It all began, not with the MLI, (more of that later) but with a pair or trousers.  Beautiful, dark grey, wool flannel, perfectly fitting, Jigsaw trousers.  I wore them and I wore them, with a wrap top for work or a dressy shirt and pashmina for the theatre.  And then they wore out.  Not in holes exactly but one day I narrowly avoided a serious wardrobe malfunction then I happened to hold them up to the light and saw that the whole seat was worn to transparency. 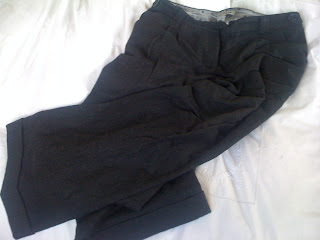 As the legs were still perfect and I had the germ of an idea to use the fabric for some sort of patchwork and then pushed them to the back of the wardrobe and forgot about them for a while, until I had on my hands these beautiful leftovers. 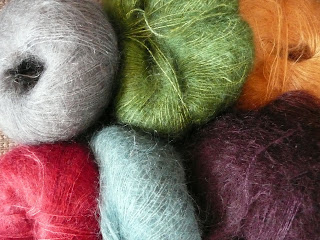 And the two bundles of lovely stuff suggested cathedral window patch cushion.
Even tugging hard at a cut edge of the wool flannel it did not fray so I decided to fold the base patches only once, this saved material as well as bulk. 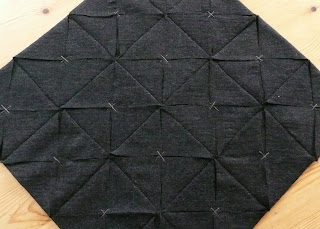 Each knitted window pane patch was slightly different, three in each colour and each colour in a different stitch (nothing fancy just stocking stitch, garter stitch and rib) three striped and one checkerboard.  I know that it is possible to make stunning quilts in quick fire time but I love the relaxing feel of hand sewing, which gives me the same sense of calm as knitting, I can almost feel my pulse slowing and my blood pressure dropping. 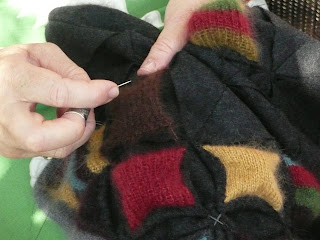 There is so much opportunity to work on the tiny details when making something small .  Sometimes my projects grow organically, the pieces themselves suggesting how they should look.  I began with one piece of cathedral patch, using only recycled materials.  As it grew into three cushions I knew I wanted them linked in many ways.  I had the yarn, the recycled material is all grey and then one morning (in that land between sleep and wake) I thought about the backs.  It’s all well and good to have a beautiful front but what about the back? – things like a waist band, pocket or collar lined with contrasting fabric, to give joy to the wearer even if no more than a quick glimpse is afforded to everyone else?
The backs of my cushions were to be beautiful, amusing or decorative in their utility,  Cathedral Patch has a single patch in fairisle using each of the yarn colours and grey knitted piping. 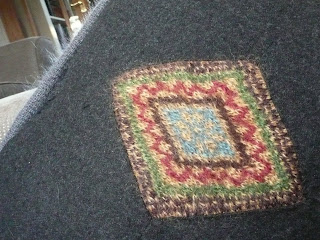 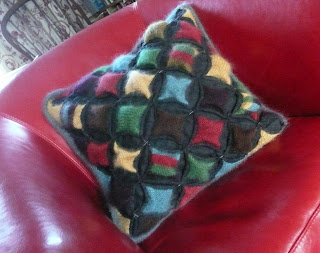 Number two cushion is made, and number three waiting to be sewn together, but production has slowed a bit.  I am writing this on the Greek island of Paxos where I am lucky enough to be staying for nearly four weeks.  In paradise the internet connection is slow at its best and sometimes absent for days at a time and the distractions are many.  So please, if you are one of my lovely regular readers, excuse the deplorable slackness and departure from my usual two posts a week.
xx
C
Posted by Catherine at 11:46

Email ThisBlogThis!Share to TwitterShare to FacebookShare to Pinterest
Labels: Knitting, make do and mend, patchwork, Triptych

Very pretty! These will become heirlooms for sure.

What a lovely cushion.

Have a good holiday!

I LOVE that cushion!!!