If I look up from my knitting on my daily commute, this is all I see, so generally I don't, I knit. 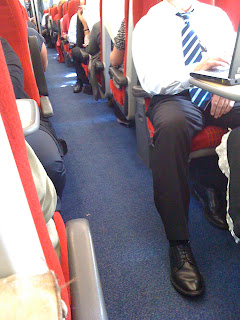 I am knitting a pair of black socks, using a technique known to the sock knitting sorority as TUTAAT  (toe up two at a time).  Anyone who keeps a crafting project specially for travelling knows the value of a compact kit. TUTAATs are just that, two circular needles, some stitches permanently on the needles (so no dropping and foraging under train seats) and one ball of yarn (if you knit from the outside and the inside of the ball).  Although it can all get a bit messy at times 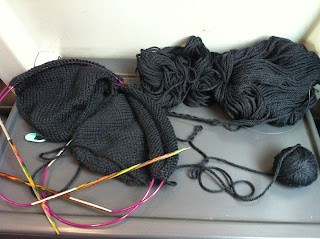 Most people who read this blog or follow me on twitter know quite a lot about my knitting life but it seems that fewer people know that I live a double life.  When last week I tweeted

Time put nose to the PC. Working at home interrupted by 2 meetings at the Law Society in PM Must avoid dreaming of new #knitting project

Tanya, who tweets as @strikk and has a blog of the same name which I follow as she does mine, tweeted back

How is it that I've only just realised you also a lawyer-ly type who knits.....! #separatedatbirth

I still spend a fair amount of my working life stalking the corridors of power in my dark Lawyers suit, much of it is fascinating

I took this photograph of the lobby to the House of Commons while no one was looking (I hope I don't get sent to the Tower for this!) 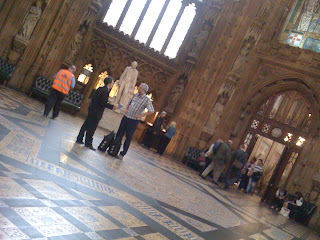 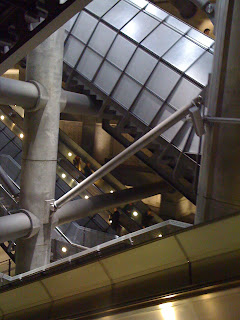 But it can all become routine and at times my mind wanders to thinking about the work I shall do on the train home and my amusement at the looks on the faces of my fellow passengers as I pull out of my briefcase, not a sheaf of papers, but my knitting

Black socks might be quite suitable for work wear on a chilly day but I shall knit a fairisle border along the top. I'm thinking of crossed knitting needles and a ball of yarn Email ThisBlogThis!Share to TwitterShare to FacebookShare to Pinterest
Labels: Knitting lawyer, Two up two at a time socks

Sounds like the perfect travel project. I am sure if I knitted from the same ball I would have it in a tangled mess in no time!

wish i could do things on my commute. Its only about 10 mins on the train and i usually don't get a seat so it would prove tricky! that and it would be abit hard getting the sewing machine in my bag! x

Am I the one other?

yes Sarah you are!