I promised myself I would not knit anything new until I had finished my Titanic Sweater.  But - broken promise - I just had to cast on some beautiful Manos yarn and challenge myself to knit a short sleeved sweater in a week. 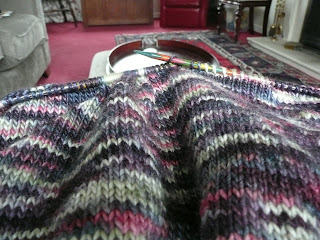 I failed at that too.  Although it's nearly finished, I just need to decide how I am going to finish off the neck but I got diverted by the Twitter Food Challenge.

This is not a national sport, nor even some new twitter hash tag but something between friends.  On Sunday when my friend Lizzie Speller tweeted...

@TheFlowerFarmer @Bosleypatch We need to ask @cehopkins2. When in Greece she has proved herself to be ice cream inventor to the gods.

Now The Flower Farmer and Bosley Patch are wizard gardeners and usually have better, horticultural things to chat about but  Lizzie and I often tweet about food.  Perhaps this is because we spend a fair amount of our time trying to avoid it when hoping to fit into THAT DRESS.  But Lizzie and I also spend a couple of weeks in Greece every year, and while we are there we eat a lot of baklava (Lizzie also eats what she calls tiny apple turnovers too but that is another thing). 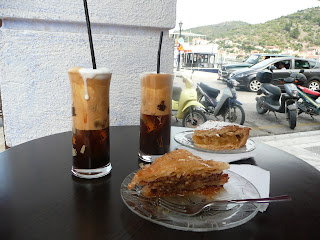 And drink iced coffee (why does cold instant coffee with lots of sugar and milk froth taste good on holiday but wouldn't pass ones lips at any other time?)  Once I made ice cream with oranges from Lizzie's garden, plus eggs, sugar and Greek yogurt.  So I suppose I could make baklava flavoured ice cream. 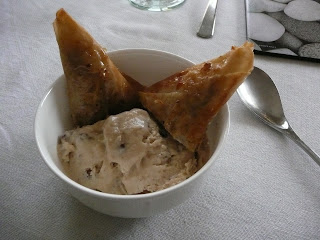 PS - This led to a small twitter debate.  Who can lay claim to the recipe?  The one who had the idea or the one who made it work (Daedalus or the Wright brothers).  What do you think?
Posted by Catherine at 14:03

Baklava ice cream? That sounds amazing! You have some of the best adventures!

What I Created Next said...

I have awarded your blog with an award ‘The Versatile Blog’ and if you want to have a read about it please see my blog. Thank you.