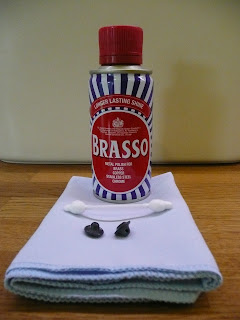 But more of this later...  The latest Titanic project felt a little like going off piste without a map.  The #0219 blouse which came with pattern and a photograph but no instructions

Now I've made plenty of blouses before, with collars and cuffs and curved yokes, even one from the project how hard could it be?

The pattern size was several inches too small for me so I slashed the pattern and spread it to give me 4 inches extra all round. 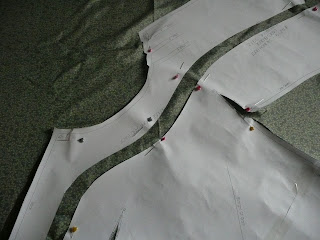 This piece is side front and back and one sleeve, cut on the cross (bias).  At this stage I imagined the slashes at the underarms were darts but did wonder why the pattern numbers did not match up...

(NB these patterns do not have balance points as we know them in modern patterns but there are numbers at strategic points on each piece and as you sew you match 30 to 30, 31 to 31 and so on)

So I went merrily on my way, interfacing the yoke and centres, collar (cut from white medium weight linen) and cuffs with light weight fusible interfacing 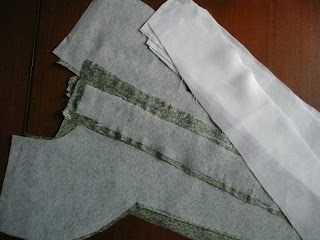 Attaching the piping to the centre front, yoke, and centre back section first using the cording foot of my machine.  Then, with the same foot attaching the yoke after clipping curves and corners 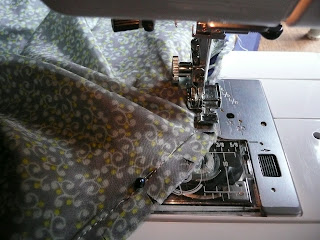 Next comes the underarm  and side seams - EEK! they do not match in length and that slashed part is not a dart.  Saved by the project blogs, people have gone before me.  The seam from hem to cuff does a sort of dog-leg turn at the underarm.

I still found it tricky.  Particularly as my fabric is a very fine floaty 50/50 cotton silk mix and frays very easily.  In the end I machined the sleeve from cuff to the turn and the side seam from hem to turn then stitched the horizontal piece.  At first the seam looked puckered and you can see that it is made of 3 separate lines of stitching. 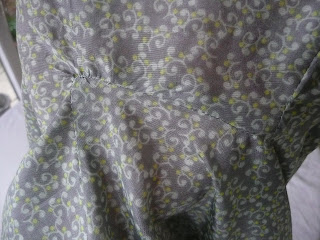 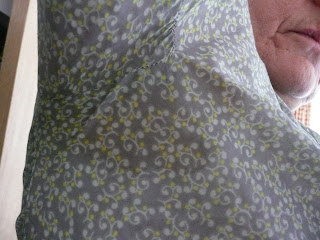 Now buttons and button holes (and Brasso).  A friend from my knitting group had given me some vintage buttons and this blouse seemed the perfect garment for the set of grey Bakelite ones. 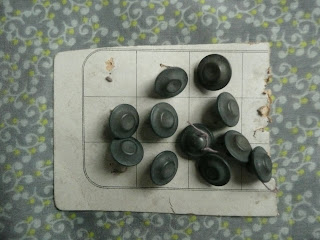 Bakelite was developed in 1907 and patented in 1909 and is the first ever plastic.  It was not actually produced commercially till the 1920s and 1930s (certainly in any great quantities) but the buttons are nearly from the right era.  Although there is no Bakelite label anywhere,they are certainly of a plastic like material and have the characteristic bloom that develops on old Bakelite. So armed with the tin of Brasso which according to a website for collectors of Bakelite is The Thing for cleaning it up I got polishing with nice shiny results. 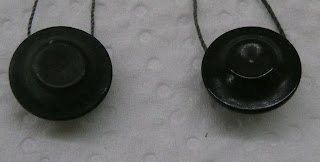 While I'm on the subject of buttons, I fund three white buttons styled like collar studs in my button boxfor fixing the collar to the narrow bias neck band, two at the front and two at the back 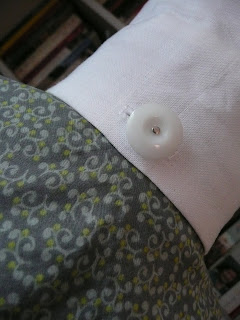 I have found that patterns of this age tend not to supply pattern pieces for parts that are simply a rectangle, square or strip, the instructions simply giving measurements.  And here I needed to improvise for neck band, cuffs and binding for the lower edge.

The neck edge I bound with a bias strip, applied not as a facing but as a stand up binding to give something to button and snap the collar on to.  As well as the button at the back I attached press studs to the front and sides of the band and on the collar.  Securing at these four points seems to keep the collar in place neatly

The cuffs were easy, choose your depth, measure your wrist size, add 1.5inches overlap and seam allowance to all four sides, cut four.  I slashed a 3 inch sleeve opening about 4 inches up from the underarm sleeve on the outer aspect of the sleeve, binding the raw edges with a strip of bias binding cut from the main fabric.   Gathering the lower edge of the sleeve to fit the cuff, less teh overlap I attached the cuff in the usual way

For the lower band I decided to make a wideish band that would sit comfortably on my waist and lie flat under a skirt waist band so I cut a 5 inch wide strip the length of my waist measurement plus 2 inches for overlap and seams.  I gathered the lower edge of the blouse (side front and back sections only) on to one edge of the band making sure the overlap matched that on the blouse itself, folded it in two, machined across the ends, snipped corners turned it right side out and  turned and hemmed the inner long side to the line of machine stitching. 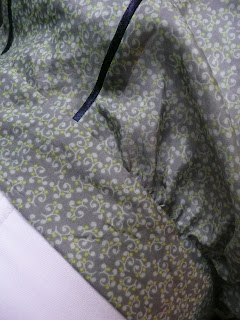 Now for the great try on.  I decided to wear it with my scallop edge skirt and with full underpinnings.  How exhausting is that dressing in chemise, corset and  princess slip before getting to the top layer?  I needed a short rest while still en dishabillé 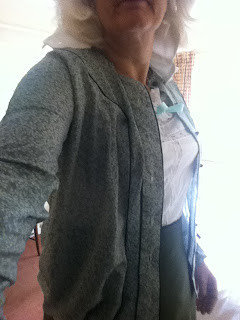 And here we come to the meaning of my bog title.  I really look like a grandma once properly buttoned up

And since I do, I thought I would add the glasses 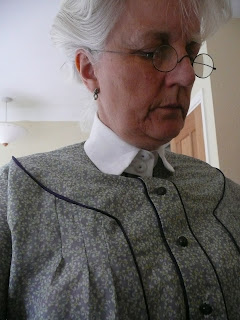 Now for the VPLL1912 checklist 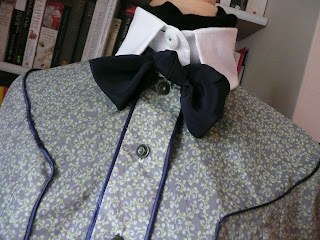 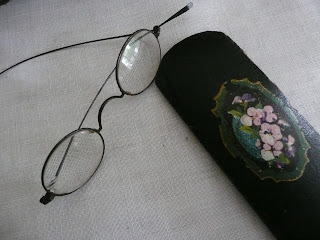 I'm very impressed it looks amazing, I was especially excited by your cording foot was it as good as you hoped, you look beautiful as a grandma by the way :)
Cathie from knit and natter

Your blouse looks very nice! I love the piping detail and the fabric you chose. I was wondering if you could show us a couple more pictures of the collar, though. I didn't make one since I couldn't figure it out, but I would love to see what yours look like without the collar buttoned on, and maybe how it attaches? Thanks!

Well, yes. But you look good :) As do your blouse. Perhaps my next project? :)

I laughed when I read your description of the blouse being school marmish, because that is what I thought when I saw the ensemble complete with the glasses.Though I thought head mistress rather than teacher.

You are a very trim and slim grandma in your skirt and blouse. I love your white hair, mine has skunk streaks!