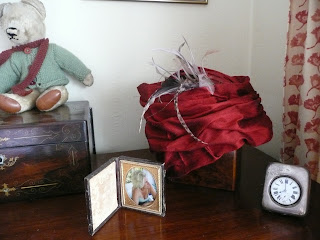 I wear hats, sometimes for fun and sometimes for warmth, I wear them on snowy days, sunny days and wedding days.  But there was a time when women would not go out without a hat, particularly mature women like my grandmother.  I just remember her in the 1950s when she was in her late 60s and, true to her upbringing in the early part of the 20th century she thought it was positively improper for women to be seen outdoors without a hat.  Hats (and gloves) were for correct, respectable dressing, not just for fun and vanity.

So when the latest Titanic challenge came along with the description, Mature Ladies hat it made me smile and remember my grandmother... but it also made me frown. 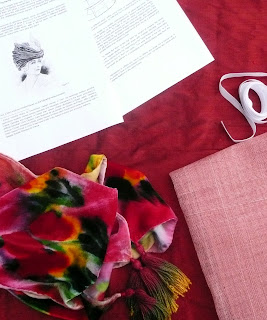 I earmarked some silk dupion from my stash, bought some tape and some buckram, printed off the instructions and considered using a hand printed silk velvet scarf in some way as a trim.

But I had never made a hat before and this one came with a set of rather confusing instructions and no pattern.  I decided to wait until others on the vpll1912project had made hats and blogged about them.  I have never joined a group sewing project before but this is the big advantage, everyone sews at their own speed and blogs about their successes and problems they have solved which helps the rest of us.  Before plunging my scissors in I read blogs from Liondefleur and Pam Two basic shapes - a crown, and sides that slope outwards towards the top and at the bottom a band that folds under and tapers to one's head circumference (the tabbed section with notches cut in it).  Essentially one has a stylised toque that stands a little bit away from the head. 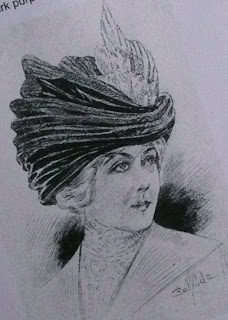 To get the crown right I needed a little height.  Steaming the oval of buckram over a saucepan and moulding it on a pudding bowl gave me roughly the right shape 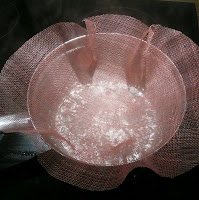 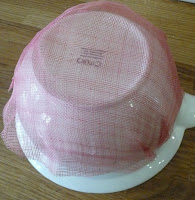 Before fixing the crown to the sides I cut an oval of silk about twice the size of the buckram crown and loosely pleated it over the dome, fixing with small stab-stitches where I wanted the folds to go (I was aiming for a walnut whip sort of arrangement).

Before attaching the silk to the sides I cut a piece of tape to fit my head circumference, folded under all the tabs at the bottom edge (you can see how I cut the tabs on the picture above) and fitted them to the tape. Then I tacked the whole piece into a ring shape by creating a back seam.

Thus I now had  the hat in two pieces, a crown covered with silk, and the as yet undraped sides sloping outwards towards the top and folded under at the bottom edge.  Inside it funnelled into a diameter to fit my head.

The silk for the rest of the cover was cut twice as deep as the buckram.  Now I know the hat in the sketch looks a little as though it is based on a wonky concertina but I wanted rather more fluid folds.  First I tacked four equal sized pleats at the front, back and the middle of the sides only, still leaving plenty hanging down to turn under as a lining.  Once I had pulled up the pleats I messsed them up a bit and tacked them in place just as it took my fancy - like this... 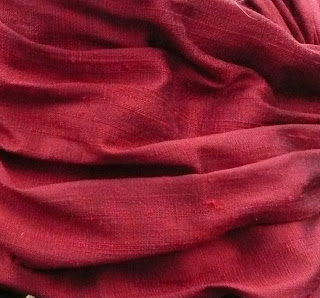 I then pushed all the spare fabric hanging at the lower edge up inside the hat to form the lining fixing a small crown of silk at the top of the inside to cover over all raw edges.  I reckoned that the extra folds of silk would pad out the inside of the hat and help it to fit snugly.  I made the whole hat by hand, no machine stitching.  There were no time consuming lengthy seams but the main reason was it is easier to tweak the shape as you go to get the drape of the fabric just right.

I mentioned at the beginning that I was going to try and use a velvet scarf as a trim.  But this scarf is made by my very clever cousin Sharon Verry  (she works as part of an artists cooperative in Cornwall called the Guild of Ten ) and I had no intention of destroying it, I needed to find a way to use it in a whole piece. 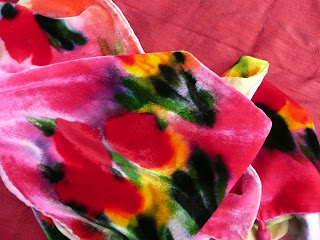 In the end I didn't, the scarf, it was too bulky, a small scrap of the fabric highlighting one or two of the folds would have been fab but I don't have any small scraps!  So I contented myself with a small corsage of feathers instead.  The hat is quite comfortable, I think to feel totally secure I would need to employ a hat pin or two but other wise I feel rather glamorous in it 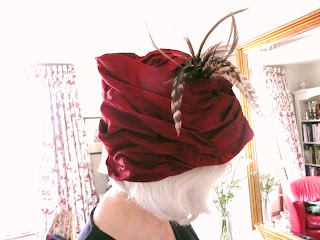 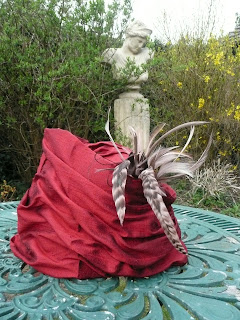 PS I am making progress with the tunic  I may have mentioned my big failing as far as knitting is concerned - I have the bad habit of not knitting test pieces.  However, in this case there are several reasons why I simply  must play around with yarn and stitches.  I have no pattern, no idea what some of the colours will look like once knitted up and am not even quite sure what some of the stitches are.  So what I knitted was more in the way of a random sampler than a tension square. 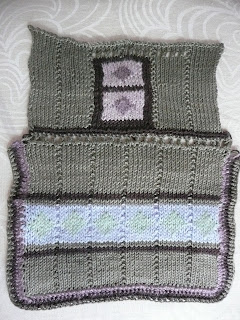 BUT I know what I am going to do now.  I have gauge, colours (I am going for the colour way at the top of the piece) and I have some idea how I will combine crochet with knitting to get the right effect.  I still have to figure out the tassels but I can leave that till most of the tunic is done.

OMG! I LOVE THE HAT!!! :) and I remember my grandmother always in a hat as well when she went out. ALWAYS....
Can't wait for the tunic! It's such a wonderful piece!

I love this. Again, I am amazed how wearable it is in today's terms. Your project is certainly asking a lot of you, but you seem to be finding it very satisfying too.

Great job on the hat. I'm very impressed! I had no idea where to begin on it so I've been sitting back waiting for you experts to pave the way. Thanks, A LOT! LOL

I am so enjoying your Titanic projects! I love hats and wish I had more experience sewing, so I'm living rather vicariously through your blog posts. Thank you!