This morning my friend Kathleen who writes the wonderfully named blog Knit-Like-You-Mean-It. posted this suggestion on her face book page


OK so the pattern only goes up to 24 months and The Little Model is four now but she's slim and I am up to a bit of modification in the pattern dept not to mention always up for a KAL.

So later in the morning I swung by one of our three yarn shops, chose seven fab colours and handed over my debit card. As I chatted with the shop lady about how lovely the colours were, how I should get the extra ball in case I run out AND showed her the pattern on my phone, I tapped in my PIN (I'm able to multi task like that)

Uh Oh, this is where things went horribly wrong, PIN refused, three goes then the card was locked. As I blithely handed over another card (it belonged to JTH, why should he mind buying yarn for our grand daughter?) I decided to march into the bank and demand why the PIN I had used for many years had spontaneously become the wrong number.

At the bank I went through the same process, PIN LOCKED AGAIN.  Then as I was ordering a new PIN, it dawned on the bank assistant, the card I was using was not my current account card (don't ask).  Cue huge embarrassment, I had effectively accused the bank of having a wonky computer system, when actually it was me, I had lost my card.  Oh we'll it's sorted now and I have some pretty coloured yarn and have begun swatching. 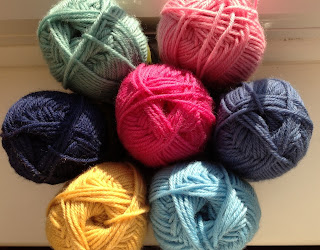 lol Oh boy what a mix up, sounds like me with my cards. Love your yarns colours.
Cheers, Anita.

I once accused a shop of short changing me as I was quite confident that the only note in my purse, popped there by my husband after a trip to the cash machine and the one I'd just paid with, was a £20. I was duly reimbursed on the basis of having paid with a £20 note so imagine my horror when on relaying this tale to him he said 'No, it was only a £10 note'.